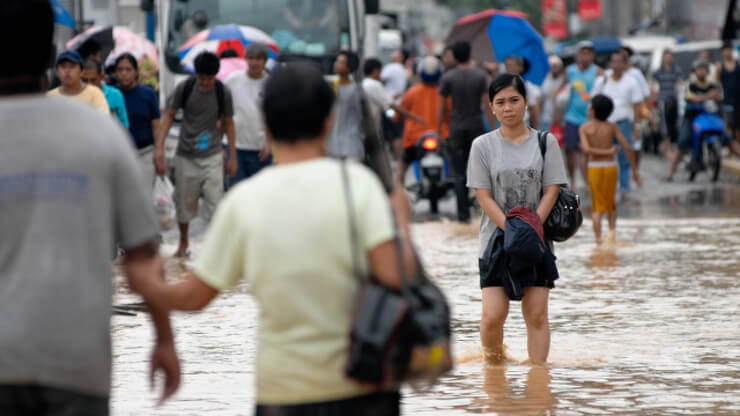 Before Typhoon Ondoy struck in 2009, relief programs organized by TGLFI are already in motion. But only after this catastrophic event did the relief and assistance arm of TGLFI become much more orderly and systematic.

“What is interesting as we look back to what happened during Ondoy is that we were also victims ourselves that time, but we did not focus on that; rather,  we made an effort right away to help other people too,”

says Pastor Peter Lee, Sr., the Program Director of the Relief and Assistance Arm of TGLFI.

At the time Ondoy struck Metro Manila, thousands were devastated – including the Lighthouse Bible Baptist Church. But this did not hinder its arm, The Great Lighthouse Foundation, Inc. (TGLFI), from distributing relief goods to the community in partnership with the Samaritan’s Purse through Sower’s led by James Tioco. This did not only include Brgy. Tatalon where the church is located but even the surrounding barangays.

Since then, inevitable calamities followed such as flood and fire, particularly in Quezon City. In Barangay Toro and Barangay Agham, the foundation helped distribute relief goods for victims. Last June 2013, the church opened its gate to house more than one hundred and fifty (150) families, who were victims of fire in the Tatalon neighborhood.

TGLFI also helped during Typhoon Yolanda in 2013. The foundation, though having been able to acquire a good number of donation from its partners, still had a fund raising event of its own to be able to go to Tacloban and help victims there. The foundation brought a good number of generators, tents, mosquito nets, blankets, water containers, and solar lights to affected families.

There was also a time when severe flooding hit the community again, and the Samaritan’s Purse donated more than two thousand (2,000) bags of relief goods to be distributed. The church cancelled its afternoon fellowship services to pave the way to distribute relief to flood victims in the community.

Another relief endeavor was to distribute goods to people who live near Mayon after its eruption in 2018. With the aid of the PHP1M cash donation from the Samaritan’s Purse, the foundation was able to provide water containers, blankets, and other essentials worth PHP1,000 per bag. These were given to the 1,000 beneficiaries around the Mayon vicinity.

How does TGLFI plan for its relief operations? Whenever there are calamities, it assesses the number of families affected. The foundation goes to the area and talks to the people in charge, such as the city organizer or the barangay organizer to know how many people are affected and how many relief bags are needed to be produced. If the number is too big for the foundation to handle, it would inform the organizers, so that the organizers can announce that it’s a first come, first serve basis. Another strategy to organize people for the relief endeavors is to bring them to the church building since it can accommodate up to one thousand (1,000) people. The foundation prepares stubs and distributes them to the community. The foundation coordinates with the porok leaders so that the stubs would be effectively distributed to those affected by the calamity.

Gift-giving and Other Programs

Not only does the relief and assistance arm of  TGLFI help the community in the face of calamities, but it also extends help in other ways. One such program is the Pamaskong Handog every December. In partnership with MGC New Life, PHP1000 worth of goods are given to 100 families per year since 2011, except in 2013, when instead of 100 families, there were 1000 families who received the goods.

With another partner, Asia Wide International Trading, PHP250 worth of goods are given to 1,500 people since 2015 and are distributed to senior citizens, mothers, youth, and children.

TGLFI also conducted free legal aid, in partnership with the Integrated Bar of the Philippines – Quezon City Chapter, where the community got free legal consultation from lawyers last August 2019. Funeral and medical assistance are also extended to the community, where a maximum of PHP10,000 can be donated to a beneficiary on a case-to-case basis.

Praising God for all these doors opened for TGLFI to extend mercy, relief, and assistance to the community!